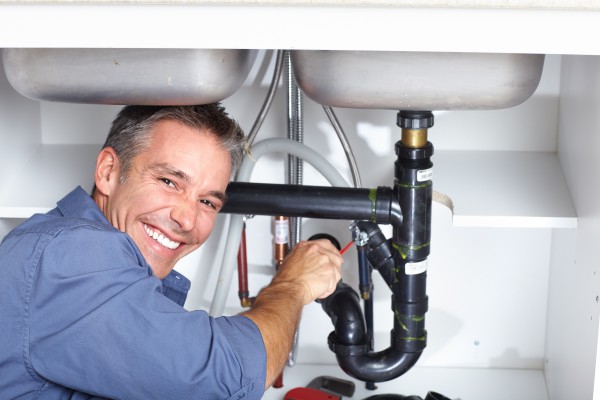 Discovering a leak coming from your garbage disposal under the sink can be stressful. Not only are you probably worried about water damage to your cabinet and flooring, but you’re also wondering what caused the leak and what it will take to repair it.

Garbage disposals are connected to the sink with a flange, which is also commonly known as a plumber’s putty. Over time, however, this waterproof seal can corrode and result in a leak.

How Does a Plumber Fix the Problem?

The good news is that fixing a bad sink flange is relatively simple—though it should still be done by a plumber and not as a DIY project because the repair does involve the complete removal of the disposal and its drain pipe.

When you call a plumber to repair a bad sink flange, he or she will begin by turning off the garbage disposal and detaching it completely. From there, the old and corroded putty will be removed from the seal between the drain and the disposal itself before the new putty is applied. Once the seal is set in place, the garbage disposal can be reconnected and used without issue.

Another possible cause of leaky garbage disposal is a bad drain line. You’ll be able to tell if this is the cause if you notice that your disposal is leaking water from its sides, which is typically where the drain line connects. There are usually two drain lines; one smaller line runs to the dishwasher, whereas a larger line runs from the disposal to the sewer line.

A leak in either of these lines will need to be handled by a plumbing professional. He or she will be able to pinpoint the source of the leak and make the necessary repair.

How to Solve This Problem

If your garbage disposal appears to be leaking from the bottom, then you’re probably dealing with a busted seal. This type of failure is most often seen in older garbage disposals, as the internal seals that are installed during manufacturing can break down and weaken over time. Eventually, the seals can completely fail and cause a leak.

How Does This Problem Get Resolved?

Unfortunately, seals are not easy to replace once they have failed because they’re an internal component of the garbage disposal. For this reason, it is generally best to simply replace your garbage disposal once this problem has presented itself.

Fortunately, new garbage disposals are not very expensive, nor are they difficult for a plumber to install. Once you have new disposal with a new internal seal, you can expect it to last anywhere from about 5-10 years before it will need to be replaced again.

Facing a Leak With Your Garbage Disposal?

If you’ve discovered a leak coming from your garbage disposal, you can usually determine the cause of the leak based on where the water is coming from. No matter what the cause of your leak is, however, it’s generally best to leave the repairs up to an experienced plumber. In the meantime, you can minimize water damage to your cabinet and kitchen floors by shutting off the water supply to your disposal and not using it until the repair has been made.

Looking for an experienced and friendly plumber to help with your garbage disposal repair? Our team at Bewley Plumbing, Inc. is here to help! From bad drain lines to defective sink flanges, we can handle any repair promptly and affordably. And if you end up needing an entirely new garbage disposal, we can take care of the installation, as well!

To find out more about our plumbing services or to schedule your appointment with us, give us a call today or book your appointment online in a matter of minutes. We proudly serve the areas of Collin and Denton Counties and are happy to offer discounts to senior citizens, teachers, and members of our military!